Living in a house, I often torture myself by watching my roommates eat eggs over toast in the morning, thinking, “Boy, do I miss bread!” Since being put on thyroid medication for hypothyroidism, I’ve maintained a (mostly) paleo lifestyle and noticed my body feeling much better from it!  I still have the occasional butter, but I avoid dairy and grains as much as possible after noticing they were the primary culprits leading to some of my stomach aches.

Bread has been one of the hardest things to give up.  I’ll admit it, I’m addicted!  While I can easily substitute spaghetti squash or zucchini for a lot of my former gluten filled cravings, bread was a tougher one for me to find an alternative that worked.  I adapted this recipe from one I found on Southern in Law (thanks for the great recipe!) by adding some fruit, seeds, and nuts to it.  I also figured I would throw in some Maca, because I can never pass up an opportunity to add in a good Superfood!  I think the hint of banana gives it a nice texture as well (and I just love bananas).  I may even try adding more banana next time to make more a banana bread.

After watching “America’s Worst Cooks” last night, I was inspired to try poaching an egg, as opposed to my usual boiled or scrambled, to put on top of my homemade bread.  The process was surprisingly easy!  To poach the egg I boiled water with a little salt and a tiny bit of vinegar (maybe 1/2 tablespoon) in a pot.  I only used about 2 inches of water.  Once boiling I cracked a cold egg into a small dish and started swirling the boiling water with a big slotted spoon (that I will use to later pull the egg out to reduce the amount of dishes) until the water is moving in a circular motion on its own. This will keep the egg from separating.  I used the dish to slide the egg into the center and let it cook for about 1-2 minutes.  Use the slotted spoon to pull it out, and there you have it!

Now on to the best part: the bread!  Here is  breakdown of how I made this delicious grain free bread: 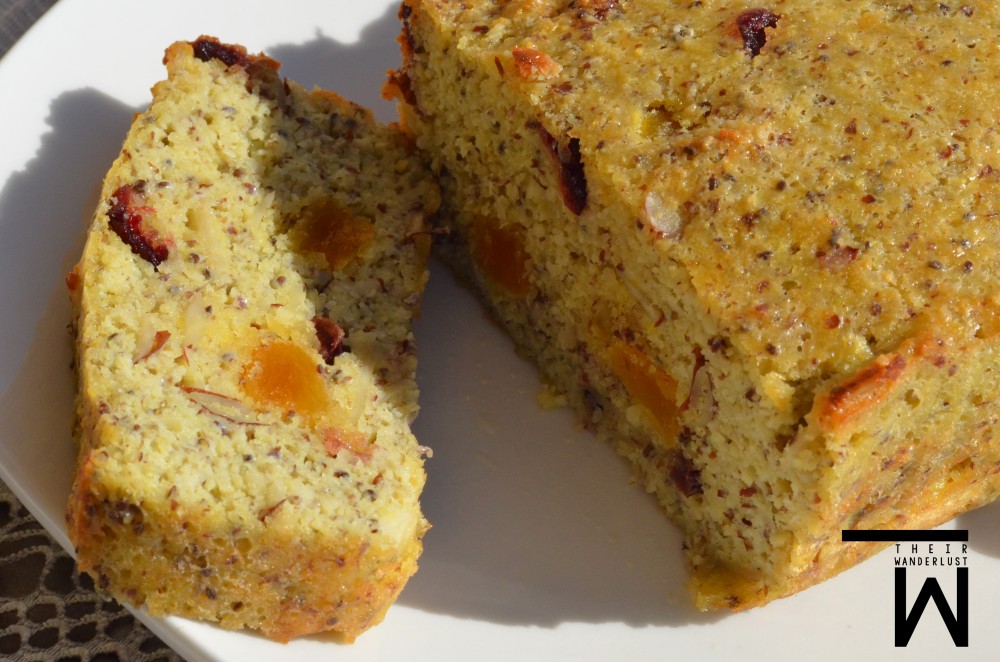 Preheat the oven to 355 and line a bread baking dish with parchment paper.  I used coconut oil to grease the dish.
Mix the wet ingredients together (eggs, coconut oil and lemon juice).  Next, add in the mashed banana and mix well to evenly distribute.  Now mix in the almond meal, flax seed, coconut flour, and baking soda.
Now you can add in your favorite dried fruits, seeds, and nuts.  For this bread I used slivered almonds, chia seeds, cranberries and chopped dried apricots.  To give it an extra healthy kick, I added in a tablespoon of Maca (a superfood I particularly like for it’s “nuttiness”)
Bake the bread for 40-60 minutes.  I ended up baking it for about 50 in the oven in a 1.5L glass bread baking dish.
Recipe by theirwanderlust.com

I hope you enjoy this as much as I did!